Okay, so as I think I’ve said before, I grew up as a pastor’s kid (in church slang, a PK) in the Midwest. I’m not saying my life was the plot of Footloose or anything, but it was a cultural climate that was VERY white, very tribal-Christian, very “Christian-Midwest nice.” It was also pretty patriarchal. And honestly, I think the particular brands of conflict avoidance I’m about to discuss enabled that and other unhealthy societal structures quite a lot. Let me explain.

First, let me be clear—it wasn’t that I grew up never confronting anyone about anything. There are codes for handling that in the land of “Christian nice” (which is how I will henceforth abbreviate “Christian (Midwest Middle Class White People) Nice”). BUT those things stick to particular topics and particular audiences. And in my particular context, as I’ll discuss, there was A LOT of forgiveness talk that tamped down any discussion of calling bad behavior to account pretty d*mned quickly.

One note before I go further: I know there are a thousand unhealthy dialects about how conflict was handled in these sorts of contexts—this was my experience. I also want to say parts of this particular brand of spirituality ARE healthy. It’s the overemphasis on avoiding conflict that is toxic in its enablement of bad behavior. Spiritualization of the process frankly–and sadly–just makes the whole thing more damaging to too many.

So, the way I was unwittingly trained to deal with conflict mostly leaned toward avoidance. Since we all do, I still had fight or flight instincts, naturally. My “peops” had steadfastly trained me in the art of avoidance as though it was our religion—in fact, sadly, it became just that.

The unspoken assumption was that if we didn’t yell at each other or hit each other, little real damage was being done. And if damage was “incidentally” happening, well, that was each person’s own responsibility before God. If someone didn’t feel “convicted of sin” on their own, no one else ended up holding them accountable for their negative behavior toward others.

Inevitably, this attitude led to a lot of passive-aggressive  overtones in our facial expressions, voice inflections, and in the words we used. What on the surface might have been innocuous ended up being used as subtle, yet cutting, weapons. That’s right, friends—I basically grew up in a modern-day Jane Austen novel. (It took me forever to realize why I loved period dramas, such as The Age of Innocence, so much.)

This rampant low level resentment was seen to be a problem, but close examination of it was also studiously avoided. We refused to see it for what it was—a symptom of an infectious gangrene that sickened us and that passed to others. We didn’t realize that we needed to treat the infection to heal ourselves and our culture.

Passive Aggression and the Toxicity of Cordial Hypocrisy

All this is to say, I was a connoisseur of passive aggression. When it came to confronting anything, especially the hurt I felt from others in the church or in my family, I learned to be super-snarky behind people’s backs. I vented with people I trusted, or in my journal—but for the most part, it was never discussed with the people actually causing the hurt. In front of people, I was largely compliant. And, as I got older, I even worked to tamp down conflict in others. I learned to piously call this activity “peacemaking.”

I later learned this overall condition is known as “cordial hypocrisy.” (I can’t express how much I loved this term when I found it. “Knowing is half the battle,” as G.I. Joe used to say on those after-school cartoons.)

Solomon and Flores define cordial hypocrisy as “the strong tendency of people in organizations, because of loyalty or fear, to pretend that there is trust when there is not, being polite in the name of harmony when cynicism and distrust are active poisons, eating away at the very existence of the organization.”

In the book Destructive Organizational Communication, Matthew Gill and Beverly Sypher contrast this idea with that of authentic trust, which they say is “social and relational; trust is developed, maintained, and changed through our interactions.” Solomon and Flores go on to define trust as “something we make, we create, we build, we maintain, we sustain through our promises, our commitments, our emotions, and our sense of our own integrity.”

Here’s the thing: the context in which I was raised taught me that it wasn’t okay for me to be angry or frustrated or to confront people about bad behavior. Instead, we collectively displaced our discomfort by targeting conflict itself as a threat. There was an overemphasis of reading the Bible in ways that reinforced our visceral responses to conflict.

At best, I was told, you brought those things to God, and occasionally you helped call people to be “convicted of specific sins,” (i.e., convince them to confess them to God and turn away from them through repentance). A lot of boundaries were placed on how this was done and who could do it to keep the activity “safe,” however. When it was used, it often became an unfortunate channel for displacing that ever-present passive aggression.

Ultimately, these responses ended up protecting those who were in power.

Sadly, my culture’s native avoidance of all conflict meant these visceral fight impulses rarely became channeled into a healthy concern for justice for those who had been sinned against, both locally and outside the church. As J. Todd Billings argues in the book Rejoicing in Lament, this is the best thing to do with our frustrations and griefs, alongside the practice of bringing them to God.

Instead, there was a heavy emphasis on “all sides” to immediately and completely forgive. Yes, there was some talk about how forgiveness took time. But the extreme emphasis on forgiveness  ultimately spiritualized avoidance. This was unfortunate: a more thoughtful mix of conflict styles would have led to better relationships.

The insistence on equal and immediate forgiveness did not lead to authentic trust. On the contrary, it led to a lot of suspicion and inequity. The emphasis on conflict avoidance meant that no one ever confronted the bad behavior of those who continued to bully and shame others, either passively or actively. This led to rightful resentment from their victims and damaged many relationships.

Looking back, it was a culturally-informed rather than biblically-grounded situation of what theologian Dietrich Bonhoeffer would have called “cheap grace”—that is, grace that, according to Bonhoeffer in The Cost of Discipleship, is “the preaching of forgiveness without repentance.” Victims of hurtful behavior were asked to forgive, but in the rush to forgiveness little work was done to  hold the actual offenders accountable. As a result, the behaviors that were hurting others were allowed to continue.

Along the way, no one dealt with the unhealthy visceral responses and emotions that continued the cycle of hurt and were continually displaced onto others in ways both big and small.

The fact that sins were all seen to be equal in weight didn’t help—that meant that people who had experienced major traumas at the hands of another were often expected to forgive as easily and “cheaply” as someone who had experienced what is objectively a minor slight. And often, because all sin and all forgiveness was seen to be equal, the real, deep, and abiding issues never really got properly addressed, especially the relational wounds between people.

Ultimately this meant that the discomfort with the short-term vulnerabilities involved in confronting bad behavior ultimately won out over the needs of those who had been deeply hurt to to be heard and healed. As a result, the dark, wounded, traumatized places in people were never really aired out. And both systemic and interpersonal injustices were never really addressed.

This cultural practice of conflict avoidance also, not incidentally, enables the bullies and authoritarians. And that’s definitely not healthy either for individuals or societies.

Have any of you experienced this? What was similar or different in your experience? (As I always say in my classes, it’s healthy to protect ourselves and others by not disclosing all the details at times, especially in public venues. So feel free to share generalities instead of specifics if that helps you feel more comfortable.)

Edit: Readers have asked for more concrete tips and tricks about all of this, so the next post up in what will likely turn into a series on “Christian nice” will offer some tips and tricks. In the near future I also plan to talk about how “Christian nice” has contributed to the enablement of victim-blaming in #metoo situations. Sign up for the email list for updates when these future posts have gone live! 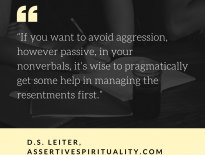 Conflict Styles The Toxicity of “Christian Nice” Part 2: Some …
Examples The Truths about Stress, Trauma, and Gun Violence…
15