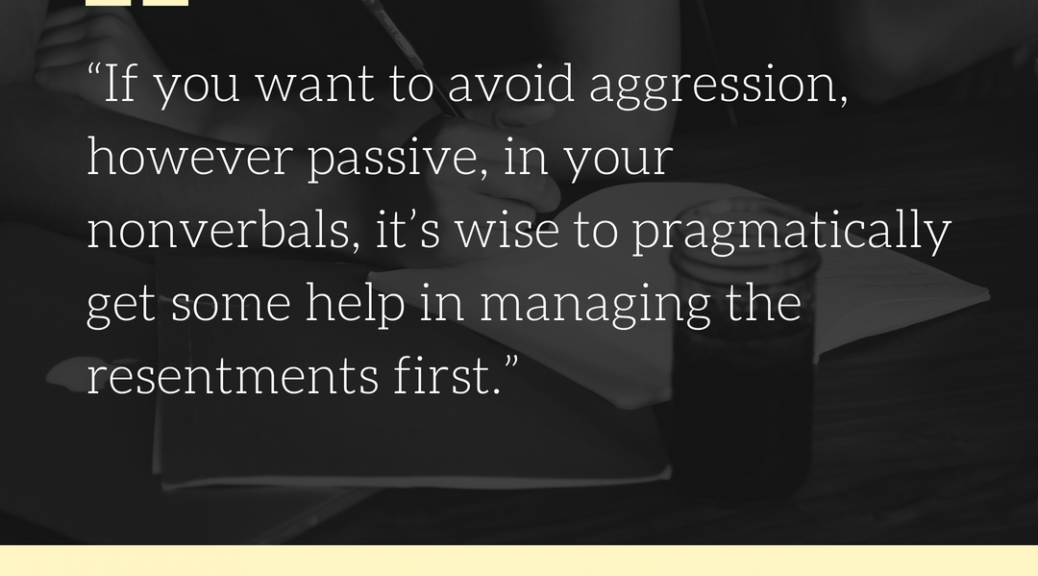 Since I wrote my post on the toxicity of “Christian Nice,” two friends in Christian ministry contexts sent me this tips and tricks piece published at Christianity Today. This article, specifically directed at Christian pastors, offers specific conflict confrontation tips to deal with the passive-aggression of “Christian Nice.” Especially since one reader of the previous piece wanted more examples and healthy conflict confrontation tips, I wanted to offer it here, and also put in my two cents, including some cautions.

First, I really loved the principles behind the piece. The examples were lovely and practical. And the potential solutions seemed like they would work in many situations. If, like me, you’re a recovering avoider-accommodator–but you’re at that stage where you’re nervous about confronting people–it really is excellent to have some specific verbal tips to build your confidence while setting rapport when you’re getting ready to do so.

Here’s my caution: the specifics could come off as mighty formulaic and even insincere or manipulative in some situations depending on the audience. Especially if these phrases became part of the culture of an organization. In other words, they could themselves be swallowed up and appropriated by the “Christian nice” monster. If the audience perceives them that way, they could also reopen old wounds.

This insincerity I’m talking about is likely to mostly be communicated through the nonverbal aspects. One of the super important things to realize is that nonverbal forms of communication (especially tone and facial expressions) often display the resentment behind cordial hypocrisy/”Christian nice” even when we don’t mean to communicate it.

As it happens, that’s part of the way our bodies are put together. The neurological pathways that affect our emotions and nonverbal communication lie closer together and work faster than those that create our words. This fact of physiology often creates what communication scholars call “incongruous disconfirming communication.” This term means that someone may be saying “you’re fabulous” with their words, but because it’s delivered in what comes off to be a sarcastic tone, the audience understandably interprets the opposite message.

Not incidentally, this type of communication forms the core symptom of how cordial hypocrisy may be detected by those well versed in its cultural forms. Unfortunately, practitioners in denial will often tell you to only focus on the verbal message and tell you you’re wrong in picking up on the nonverbals that are undermining it.

That can be incredibly frustrating. It can also be a form of gaslighting, a helpful term that captures the many ways people are led into distrusting themselves through being told what they know to be true through evidence isn’t real.

To be honest, one part of Peter Scazzero’s tips in the CTPastors article particularly poked an old wound in me.

So help me if anyone comes up to me and says “I’m puzzled by…” If someone said that to me, I would be tempted toward actual violent aggression.

I say this because I can hear the exact sanctimonious tone of voice in which that phrase would likely be delivered. And frankly, it would pull up old wounds for me, because some people in the land of “Christian nice” already address people in these ways, and “I’m puzzled” is very close to something I’ve experienced.

In that previous situation, the seemingly compassionate inquiry was really a form of denial of the real problem. I had explained what the problem was quite a few times. And yet the person kept transferring the emotional labor onto me. The continued asking of questions in that situation may have been genuine, but it felt disingenuous and hurtful.

If I heard this phrase from someone else, I would know that someone new using that phrase or approach wouldn’t necessarily mean to be digging into that wound. But especially if they used a sanctimoniously passive aggressive tone, I would have a really strong reaction. I would definitely need a bout of self-care time to deal with it.

So yeah. On one hand, this list of situations and tips to counter them are a breath of fresh air. On the other, though, to those who have already been traumatized by cultures of “Christian nice,” there’s no guarantee that they would work all the time. In fact, they may do further damage, whether or not you mean them to.

If you want to avoid aggression, however passive, in your nonverbals, it’s wise to pragmatically get some help in managing the resentments first. Here’s the solution: actually manage your own emotions, especially any shame you may feel, before addressing a conflict. That’s the biggest tip I would add to Scazzero’s list. 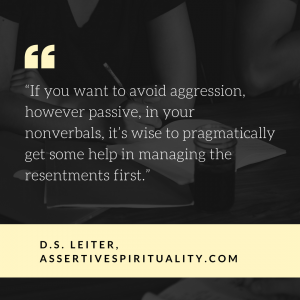 For emergency emotion management, I strongly suggest mindfulness apps. My favorites are Pacifica and Stop, Breathe, and Think. (I’m not getting any referral fees from them—I just really like them, and both have parts that don’t require subscriptions to access.)

Most of these apps have little 5-15 minute guided meditations that help you deal with your emotions, etc. One of my favorites is called “Handling Challenges” over at Pacifica. This meditation asks you to imagine a difficult experience you’ve gone through, and has you envision the negative emotion you were feeling as an object that you hold outside of yourself. And then you “set it down” and allow it to be “one object in your room.”

Mindfulness has been scientifically proven to retrain the brain pathways to help people have healthier responses to stress.

These apps aren’t meant to replace therapy if you need it, but they’re pretty useful to kick into gear when you know you need to confront someone, however calmly you plan to do it. And a nice supplement to other stress and emotion management strategies.

The Dangers of Tips Lists

One more caution: As I tell my communication classes all the time, there are no silver bullets in communication. And that sucks so hard. But it’s important to realize. Because our desire to fix everything with just the right communication tips—that can easily become a desire to control things.

And we need to leave space to manage the discomfort of the fact that we’re not supposed to be able to control people. Because if you find yourself doing that, you’re likely being abusive, whether or not you mean to be.

So yeah. It’s always important to remember that communication is collaborative. You can do your part to try to be assertive to influence conflict, and you should. But it’s up to the other person to interpret whether you’re being a jerk or not. In some ways, it sucks that that is so.

But anything else becomes unhealthy coercion. And that’s never good.

I do hope you find these tips useful. But proceed with two awarenesses: (1) It’s good to influence situations, but unhealthy to control them; and (2) anytime you go into a conflict, it’s healthy to take at least a short emotion management break before doing so. Mindfulness apps are great for that: check them out if you haven’t already.

Next up in what has become a series on “Christian Nice”: a discussion of why and how these toxicities can literally make us sick. I also plan to discuss other parts of the problem soon, including how “Christian Nice” can enable things such as domestic abuse and authoritarianism.

8 thoughts on “The Toxicity of “Christian Nice” Part 2: Some Tips to Counter Cordial Hypocrisy”

The Toxicity of “C… 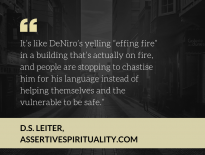