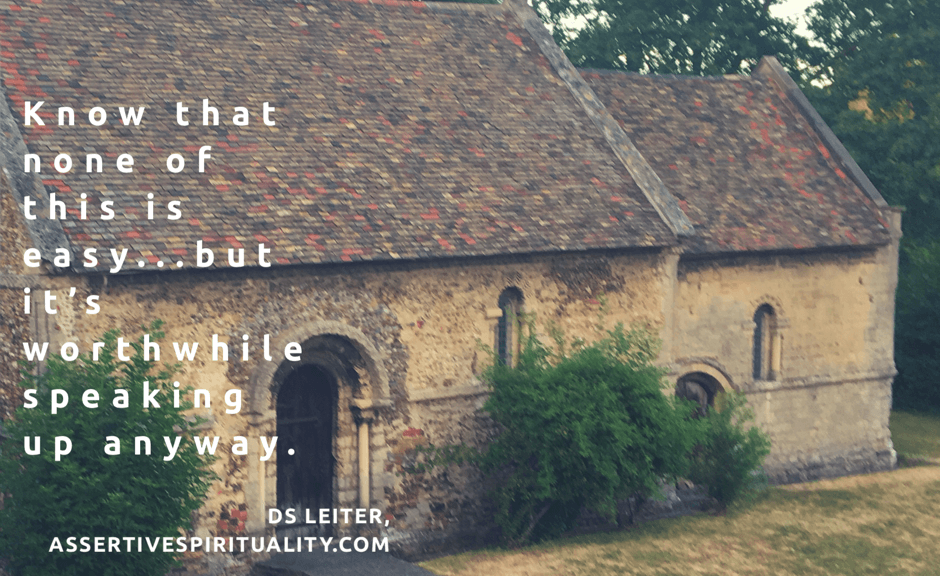 As I write this article, I’m tired. (Some call this condition outrage fatigue or compassion fatigue.)

I’m tired because it’s been a long week.

It’s been a long year.

(Oh, and I know this is a long article. Stick with me—I think you’ll find it worth it, and encouraging, to stay to the end.)

We’re All Tired for Good Reason

I’m tired—we’re tired—because we’ve been put through a lot of stress as a nation in the last couple of years. The current head of the administration has been displaying classic strongman demagogue tendencies, which not coincidentally are very similar to those displayed by domestic abusers.

I know this because I’ve studied both authoritarian rhetoric and interpersonal communication. (Not that that will make you trust my expertise, or my assurances that I’m not saying this to be partisan, if you trust the strongman abuser and his folk more.)

Here’s the thing: the current head of the executive branch is an authoritarian strongman. That means he wants all the power for himself. There is no collaboration or civility with him—caring about others as well as himself. (If he placates people with policies, plenty of evidence shows it’s for his own gain. Sure, not everyone believes this, and I’m about to explain why.)

Characteristics of the Strongman Abuser

He Wants People to Deny Their Own Senses

He doesn’t want them to even believe video or transcripts of his own words that contradict what he said 10 minutes later.

He wants their ultimate trust and defense of him above all other sources. That means he tells his followers to deny what other sources and even their own senses tell them. He wants them to distrust his own previous words, even. What he wants is for them to trust him and him alone.

He wants to convince them that dissent is wrong and evil, and that the other side is picking on him. He’s excellent at displacing blame onto others.

A Quick Idolatry Alert for Those Who Identify as Christians!

(If this description is beginning to sound to those of you with Christian background as the classic descriptions of Satan or idolatry or Nebuchadnezzar in the fiery furnace story in Daniel or Caesar demanding to be worshiped as a god, it should. The strongman classically claims for himself all the power usually given to God, but abuses it. God, in my belief at least, fights abuse.)

On Gaslighting as a Technique

What I just described—the whole getting you not to trust your own judgment in favor of the strongman’s, so to stroke the strongman’s (weak) ego—is a classic domestic abuse technique called gaslighting. It’s stressful and exhausting, both for all those victimized by it, whether they realize it or not, and for those who see what’s going on and try to call it out. The only ones who benefit are the strongman and his fellow opportunistic exploiters.

Oh, and not coincidentally, it’s also a classic domestic abuse technique to get the abused people to also distrust the perceptions of their more aware friends and family (and other patriots)—this puts the abused person fully under the strongman/abuser’s control, which, again, strokes his ego at everyone’s expense.

To ensure his followers think he’s a “good guy,” the strongman demagogue also deflects blame from the real problems onto largely innocent targets. This rhetorical device is called negative projection in psychology; studies of rhetoric call it “whataboutism” (but what about…) and “scapegoating” (piling all the blame onto the backs of a single party or group so we don’t have to deal with the real issues).

Often, it’s a group that’s already been abused that’s picked as the scapegoat, because the strongman is a bully. He’s picking on people who have already run from violence. He’s a predator, so he’s picking on everyone who he sees as a threat, but especially those he perceives as the “weak ones in the herd.”

It’s Not Just Strong Opponents Who Get Scapegoated

He’ll pick on people who already don’t have full rights as citizens. He’ll argue that others who have already been picked on are bad and evil and criminals.

He’ll pick on the vulnerable, the marginalized, even the children. And the sources who agree with him, who are enabling him, will tell you it’s kindness. That it’s either for their own good or that they’re evil, and the ways they’re being treated are justified. That those who disagree are snowflakes. He’ll get them to support him, defend his “goodness,” and in the process abandon those who look out for those most hurt.

The strongman tries to get you to support him the most, and to look to him for support. But he doesn’t need our support or defense, and his actions show him to not deserve trust. The scapegoats do. He’s not collaborative, so he’s created an emergency situation, which is simultaneously real and manufactured, in the same way that an arsonist manufactures a fire, which can hurt people. You need to choose who you support—the strong or the weak. It’s that simple and that challenging.

Again, These Are Good Reasons We’re All Tired

Dealing with all of this is exhausting and legitimately stressful and threatening—remember that stress responses are our body’s response to felt threats. In the case of strongmen leaders as well as abusers, these are completely legitimate ways for our bodies to respond.

Here’s the first line of defense against this kind of abuse, and with the outrage fatigue and compassion fatigue that comes with the stress of fighting against it: Know that your concerns with the situation are legitimate.

Strongmen leaders and abusers alike ARE threats.  And the current people in power in the US fit that description. Part of the way you know this is that they fit these classic patterns. Another sign is that they praise others who fit this pattern, and inflame those who don’t.

Whatever else you believe, know that. They are not, contrary to what they tell you, “the good guys.”

If You’re Disturbed by What’s Going On, Know that You Are Not Alone

Many of you reading this are among the group who’s been working against this—the group I called out in the last article I posted as the most civil group. The group working to look out for the vulnerable, the ones who don’t believe the strongman’s and his enablers’ rhetoric. The ones who are fighting their own fatigue from doing so.

Please begin to fight your rightful fatigue from the process by knowing that you are not alone. If you feel disturbed by what is gone and can see the patterns I’ve described, know that your concerns are valid. If your relationships with enablers and supporters have been disrupted because of this, know that that’s a regrettable but natural part of the pattern.

If you’re in the group that can’t quite see these patterns, I encourage you to reach outside of the sources that usually seem to make the most sense, and look hard at the patterns of behavior and evidence.

Know that none of this is at all easy. This is a hard battle to fight. It’s wearying for a reason. But it’s worthwhile to keep speaking up anyway.

So Yeah, I Really Just Threw Some Sunshine Down on the Situation, Didn’t I?

I did that—called out the legitimate negative emotions so many of us are feeling—because in situations where we and others are being abused, it’s important, and therapeutic, to acknowledge the legitimacy of negative emotions and concerns (cf. #metoo). We don’t have to dwell in them, but we need to acknowledge them. That’s what all the research shows.

Avoiding the problems and the conflicts doesn’t make it better. Not letting ourselves feel the pain doesn’t help us.

So yes, the first defense to gaslighting and projection and whataboutism and scapegoating is to acknowledge that all of this is highly unpleasant. And it’s worth speaking up anyway.

We All Need Literal Encouragement

Accepting reality is important, even when it’s hard. Supporting each other in our perceptions is also important. That means the second defense is offering and receiving support from others who see the same thing.

To do so isn’t to “retreat into an echo chamber.” It’s not to “be a snowflake.” It’s how we were designed. When we feel stress response from a threat—in this case, a legitimate threat, a big threat, a threat we might not be able to face on our own—our bodies release chemicals that ask us to rely on trusted others.

This is a wholly adaptive characteristic from a biological perspective, because threats that can’t be faced on our own may be overcome by a group’s efforts. (It’s also what many religions, including Christianity, tell us to do—help each other out.)

A group’s literal encouragement is also crucial to give us the strength to keep going, even when it’s hard.

Sigh—Unfortunately, That Same Mechanism Is What Those Under the Strongman’s Thrall Are Experiencing

Incidentally, this same biological mechanism—the one that points out that we need others’ support—is what the strongman abuser exploits, which is what makes his work so insidious. He exploits this mechanism, and cuts his victims off from others, so they have to direct their praise to him alone (and secondarily, because he can’t get around it, to other enablers, exploiters, and supporters inside his cult-ish group).

The important thing to remember: this is a shared situation of stress. The latest American Psychological Association report for 2017 showed bipartisan stress (63% of us! And that was back then!) about where the country was going.

That’s because abusive situations are designed to stress everyone out. That itself shows the threat is real, and the techniques I described are actually at play. These strategies, incidentally, also make it difficult to distinguish between those who unwittingly buy these lies and those who are willingly complicit in the exploitation and abuse.

I Know It’s Hard, but Let’s Fight Negative Behaviors and Beliefs, Not People (Which Doesn’t Mean We Shouldn’t Hold Them Accountable)

It’s helpful to remember that, because it doesn’t help to dehumanize anyone in this situation. That doesn’t mean we have to enable any of the strongman/abuser’s behaviors, mind you. Or to enable his behaviors, or those of his supporters. We should—we ought to—fight the problem. And in doing so, we need to fight all the unhealthy aspects I just outlined.

And that means triaging our needs and standing up for those most affected. Which means, first and foremost, looking out for the strongman abuser’s most vulnerable scapegoats.

We will all need moments to rest from time to time, and support from others as we do so—that is a consequence of the overwhelming stress of the situation.

Let’s just not grow weary of doing good, eh? When we get weary (which we will), let’s offer compassion to selves and others, rest for a little while, and then get back up again as soon as we can. It’s a relay marathon, friends.

It won’t be easy, but we can do this thing. We can look out for the common good, even when–and especially when–many leaders of our country are exploiting us. That’s when it’s most important, most patriotic, to stand up to enact our citizenship. It’s also the best expression of Assertive Spirituality. And it will help keep us and others as sane as possible under trying opposition.

We can do this! Go team!

7 thoughts on “Outrage Fatigue and the Sources of Political Conflict; Or, Why We’re All So Freaking Tired” 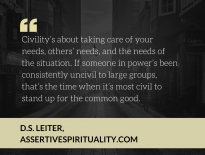 Conflict Styles In Pursuit of True Civility; or, On Standing Up fo…
7