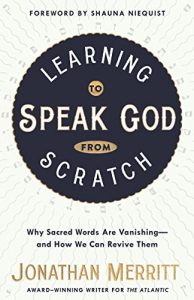 I’ve been getting my mind in gear to teach my general education communication classes that start in just over a week. And so when I read a recent Christianity Today review that’s in my wheelhouse—I’m a communication scholar, after all, and it’s a review by a communication scholar (Tim Muehlhoff) of a recent book about sacred language by Jonathan Merritt—my mind turned to an important distinction that pops up in Chapter 1 of the interpersonal communication textbook I teach.

The distinction I’m thinking of points out that all words have both a content dimension and a relational dimension.

It seems to me that Muehlhoff’s review, through cautioning his more conservative audience against “dangers” of Merritt’s book in the content dimension,  exacerbates problems in the relational dimension between that group and others, especially those who have been hurt relationally by defensive maneuvers that more conservative groups have taken to protect their content domain at the expense of relationships with others.

Ironically, Muehlhoff in his review enacts some of problems with sacred language that Merritt talks about in his book. Toward the end of the book, Merritt specifically names this damage when he explores the use of the Christianese word “lost” to scapegoat those who disagree.

Before I go further, I should note that this is definitely not an isolated a problem for which I’m trying to scapegoat Tim Muehlhoff. As Merritt notes, scapegoating is a huge problem that too often gets carried out on a broad societal scale (and, I would add, not only in terms of religious contexts). Too often, quite privileged groups who feel like their power is slipping are catered to at the expense of another group or groups. And too often, it’s the weak and the vulnerable that have been further hurt by the transaction.

I want to note that I’ve participated in this problem myself in the past, before I realized I was doing it and how it was hurting me and others. Thinking of it now in light of the content/relational distinction helps me see now how strange it is that those in my childhood community thought that really listening to and respecting those with different views was such a potential threat to my relationship with God.

But in that era of my life, I was unable to see  the way that protecting myself and other insiders who were uncomfortable with differences in the content dimension was hurting my ability to live out God’s primary commands on a relational level—specifically to love my progressive Christian neighbor as myself, much less my neighbors of other faiths and those of no faith. I was so nervous about being separated from God that I never realized how my unwittingly hurtful language might be hurting others’ relationships with God and with me.

I can see it now, now that I have changed my faith orientation to one much closer to that of Merritt’s and am pursuing a somewhat similar “third way” to that he describes in the book. Since my faith shifted, I too have been hurt by these same attitudes in turn. And this awareness wants me to reach out and require my former self to apologize. It also makes me really aware that this same phenomenon is happening in Muehlhoff’s review.

Ironically, Merritt specifically draws attention to this kind of activity by Christians in the book that Muehlhoff is reviewing. He talks about dogwhistles in Christianity as well as microaggressions in which Christians sound like they’re being kind, but are really providing cuts toward those who are seen as “outside the circle of grace,” including those who quote the wrong speakers, or innovate religious language, including “innovations” that aren’t actually innovations, but recoveries of ancient ways of thinking about terms.

The way I read it, this review tells Muehlhoff’s Evangelical audience, in Merritt’s hearing, to read the book, but not to catch his “progressive Christian” disease of uncertainty and ambiguity, which he sees as shared by many of Muehlhoff’s communication scholar brethren, albeit in a secular academic form. He does so in a way that makes Merritt a little more comfortable for his Evangelical audience, but in my view also undermines any attempts to reconcile the two groups by playing too easily to the fears of his audience.

Unfortunately, in the process, Muehlhoff also makes a few sweeping statements about communication theory that frankly misrepresent communication theory to those who may not know so much about the field. These sweeping statements also misrepresent what Jonathan Merritt is trying to do in his book. I appreciate your patience as I explain a bit of the nuance of what’s going on here.

If you’re following along in the review, the bulk of the part of the review where I see the misrepresentations occurring is toward the bottom of the article under the heading “Unsettling Reconstructions.”

The idea that Muehlhoff is labeling as “postmodern,” and is painting as dangerously shared by many of his fellow communication scholars—that “a word is defined primarily by the person receiving the communication, not by the person speaking,”—is a really broad and inaccurate statement about communication theory and the models that all intro students learn at the beginnings of their communication coursework.

See, communication scholars actually hold an impressively broad range of worldviews that don’t fit the characterization Muehlhoff gives here. In fact, to get my PhD, I’ve been through grad school and a lot of communication conferences, and I don’t know any communication theorist that doesn’t see communication as a complex collaborative and interactive enterprise between authors, their audiences, the context, and the communication channel, at minimum.

Many of these same scholars would also take issue with being called postmodern, especially the large proportion who use statistical and experimental methods to do their research.

Finally, and perhaps more germanely to Merritt’s project, it’s odd that Muehlhoff dismisses Merritt based on his “postmodern views” when Merritt specifically grounds his approach to revisioning words in a pre-modern project—that of the Jewish ways of looking at Scripture from Jesus’ day. (In fact, Merritt himself critiques the “postmodern” ways that progressive Christians approach the use of sacred language as doing too much deconstruction without attempting reconstruction, and most of his exemplar attempts to “innovate” involve reaching back into earlier, often premodern constructions of meaning.)

To be fair to Muehlhoff, Merritt’s critiques of religious language and biblical story alike do resonate deeply with the concerns of these modern and postmodern communication scholars so concerned about the abuse of language and their wounding effects on humans. But it seems to me a sad state of affairs if we’re interpreting compassion for trauma to be “postmodern” in order to dismiss it.

I can absolutely understand why Muehlhoff would be uncomfortable both with Merritt’s proposed methods and with the conclusions Merritt draws from using them to apply to sacred words. And to be clear, I have no problem with the part of the review where he cautions his readers that they may have issues with them.

It’s the mischaracterization and unnecessary alienation of the communication theory and those who have been wounded by sacred language with which I have concerns.

Going forward, I hope that all of us that were raised with a tendency to use any language in these ways, whether in religious contexts or not, will try to be more mindful of the relational dimension of our language choices, especially with outside audiences. And I don’t agree with absolutely everything in Merritt’s book, but if you’re interested in learning more about this kind of problem as it relates to sacred language, reading Merritt’s book would be a great step toward achieving that goal.

Note: this post has been a short diversion from the series I just started on Morality and “Political Disgusts,” but not entirely unrelated. More on moralities and taste coming up next week!

Like what you see? Sign up for our weekly email newsletter in the top bar of this site! Once you’ve confirmed your subscription through the email we send, we’ll send you a final welcome email with a link to an exclusive PDF, the “Assertive Spirituality Guide to Online Trolls,” which will help you understand and deal with difficult conversations both online and off. You can unsubscribe at any time. Also hang out with us over on our Facebook page or over on Twitter at @AssertSpiritual. We’re cool people, we promise. 😉 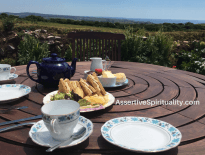