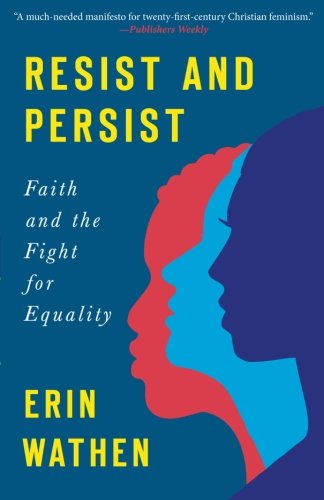 NOTE: In the spirit of last week’s post about recognizing the reasons for and coping with Outrage Fatigue, my posts over at the Assertive Spirituality Facebook page this week have been encouraging self-care even while we persist in resisting. In that same spirit, this week’s post upcycles a book review I wrote that originally appeared at the lovely Englewood Review of Books. Part of what this allows me to do is to put the final touches on the long-promised “Assertive Spirituality Guide to Online Trolls,” which I promise will finally go out to email subscribers (and email subscribers only!) by the end of the week. Sign up (in the top bar) to get your copy as soon as it comes out! Next week I hope to get back to newer content on the blog–but I wanted to port this review over here at some point anyway, so win-win, really. Have a great week! Cheers, DS Leiter

Standing up for Ourselves

A Feature Review of

Resist and Persist: Faith and the Fight for Equality
Erin Wathen I’m not sure Erin Wathen would expect or approve of my reaction when I finished reading her book, but here it is: I wanted to take my car on a roadtrip to her home state, find the church she pastors, and give her a big hug, then sit down and have a long conversation with her to find out more about her views on how the church should be working to be on the forefront of feminism.

Whether or not she would approve of my action, however, there it is. (Erin, if you’re reading this, please know that I would be doing so not as a creepy stalker, but because it frankly feels like you could use a hug, and because I’d like to dialogue with you more. I won’t actually do it.)

A variety of things in the book evoked this response in me.

First, one that might have been unintended in its effects: this book’s contents radiated the rightfully passionate frustrated emotions that naturally accompany being a female—and a clergywoman, no less—in today’s America. I’m a pastor’s kid, and I have a few young clergywomen friends, and I do a decent job of listening, so I know how not easy this is. And it’s never easy to discuss the ways in which systemic issues worm their way into subtle expressions in our everyday lives, much less to suggest ways to combat them.

Second, the book made many good arguments, especially in the last half, about what the church may be able to do to take on the problem of patriarchy. I loved her thesis, for instance, that the church is uniquely positioned to take on the problems of patriarchy and racism. I also greatly appreciated her points that the starting point is the church setting its own house in order, but also laying aside the bounds of “politeness” to assertively call out or call in these issues—and to train women within their ranks to assertively address the issues that come up, including the subtler forms of these systemic issues.

When I read these parts, I was cheering Rev. Wathen on like crazy. And, again, I wanted to hug her when she says things like she does toward the end of the book, that despite many positive parts of her experience, that “nothing in my [progressive] church upbringing equipped me to stand up for myself. Nothing in my lexicon of faith prepared me to push back against those early lessons in male aggression” (134).

This was an excellent point, and I know she is not alone in that position. Because of that, I wish she had spent more of the book specifically proposing how such assertiveness ought to be trained. (That could well be my bias as someone who studies and teaches assertive conflict management, but the fact that that’s what I do makes me even more aware of the need.)

Along the same lines, I was very much cheering her on in her chapter on the spiritual dimensions of responding assertively to sexist and racist trolling of vulnerable public figures on social media, especially Twitter. “Far too often,” she says, “we tend to let those comments pass politely because we don’t want drama. When we ignore those opportunities for conversation, transformation, and genuine faith sharing,” she goes on to say, “we are letting our privilege subvert our conscience—not to mention forgetting a clear directive of God to do justice and seek peace” (125). As someone who grew up among contexts in which conflict avoidance was sanctified and read into the Bible, I dearly loved this point. The truth is that politeness too often is complicit in letting evil have its way.

And yet, and yet. These ledes did seem a bit buried and her arguments seemed to take shortcuts at times, or to divert into areas where I already knew the material and examples (granted, that could have just been me—I keep up with things pretty well. And I’m assuming that because of publication schedules this was written before #metoo, which has boosted the signal of these issues considerably). There were also a few parts where she felt unduly inhospitable to opposing interpretations of Scripture—or at least where she was trying to take a shortcut to more thoroughly framing her arguments. These moments were usefully cued up by the words “pearl clutching,” though, and thankfully those words only popped up a couple of times. In many parts her discussion of the Bible and church contexts was quite astute.

I was also a bit bemused on the book’s take on what it’s audience was—but then again, I understood this problem lay at least partly within the context of the double-binds she was laying out about patriarchy. I’m even more aware of these challenges since I just attended a Festival of Faith and Writing session on the gender issues among readers, where I heard compelling evidence that men read mostly books written by their own gender whereas women’s reads are almost evenly split between genders. This itself sets up one of patriarchy’s classic double binds for this book, in that it may be trying to have a strong voice for the whole church, but just the fact that it’s being written by a woman may unfortunately lessen its audience to primarily women.

If you’re reading this review identifying as a man, I strongly recommend that you take some time to heed her points about the ways we subtly limit women’s voices, if only by hearing what she has to say. There were points in the book where it felt like it was speaking more to men than women. It makes me sad that statistically it has so little likelihood of reaching the male audience, because as she says, allies are needed to make real change.

The very fact that Wathen has to deal with the problem of “preaching to the choir,” leading to an ambiguity of audience in the book, is itself part of the issues she’s addressing. Part of me wishes she had fully embraced that problem and focused the book more clearly in that way. I also wish she’d started with the conclusion—which is a personal narrative about how she briefly but assertively stood up against the kind of subtle passive aggression she discusses throughout the book—and gone from there.

I do hope I run into her in the future—at a conference, likely?—and get a chance to give her that hug and sit down with her and have that chat. If not, I’m glad to have been able to hear her arguments and her passion for this important cause. 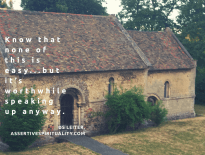 Assertive Spiritualities Outrage Fatigue and the Sources of Political Confl…
0